I'm trying to control some RGB LEDs and fade from red to violet. I'm using an HSV to RGB conversion so that I can just sweep from hue 0 to hue 300 (beyond that it moves back towards red). The problem I noticed though is that it seems to spend far to much time in the cyan and blue section of the spectrum. So I looked up what the HSV spectrum is supposed to look like, and found thisL 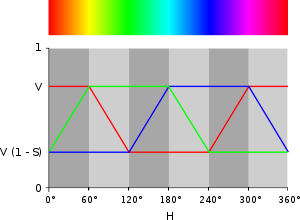 I didn't realize that more than half the spectrum was spent between green and blue. 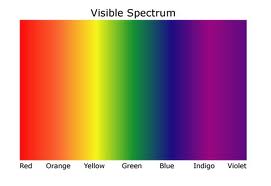 With a nice even blend of that "standard" rainbow colors. I'd imagine that this would end up being some sort of s-curve of the normal hue values, but am not really sure how to calculate that curve.

An actual HSV to RGB algorithm that handles this internally would be great (any code really, though it's for an Arduino) but even just an explanation of how I could calculate that hue curve would be greatly appreciated.

http://www.fourmilab.ch/documents/specrend/ has a fairly detailed description of how to convert a wavelength to CIE components (which roughly correspond to the outputs of the three kinds of cone sensors in your eyes) and then how to convert those to RGB values (with a warning that some wavelengths don't have RGB equivalents in a typical RGB gamut).

Or: there are various "perceptually uniform colour spaces" like CIE L*a*b* (see e.g. http://en.wikipedia.org/wiki/Lab_color_space); you could pick one of those, take equal steps along a straight line joining your starting and ending colours in that space, and convert to RGB.

Either of those is likely to be overkill for your application, though, and there's no obvious reason why they should be much -- or any -- better than something simpler and purely empirical. So why not do the following:

This is totally ad hoc and has nothing principled about it at all, but it'll probably work pretty well and the final code will be basically trivial:

(you can make the code somewhat clearer if you don't care about saving every available cycle).